The Sun Setting On Fall. 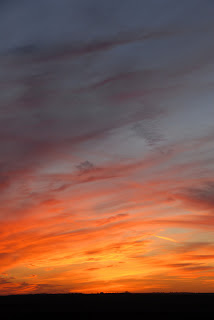 I took this picture on our front porch 2 nights ago...there was some geese behind me flying South, a crisp bite of cold in the air, and I got the feeling that this was the sun setting on a nice long fall.

Last night the season's first dusting of snow covered the Subaru as Maxim and I left the Hockey Arena...we were both excited. I think I got into winter mode this week...I checked 3 of my favorite "winter" websites...here...here....and here. Snowmaking is in full swing in the Dakota hills, and Big Sky opened a few routes with natural snow and some man-made.

I ended up the night last night with "America's Team" beating "Wisconsin's Team" and then watched some snowboarding/skiing in HD on FuelTV to usher in the "White Season".

Oh yeah, the Christmas decor in the house looks amazing...Steph totally went Martha Stewart on the house this year...we have 8 Christmas trees. 3 full size, a couple of shortys, and 3 "pencil" trees...I am ashamed I even know that decor term.
Posted by Glanzer77 at Friday, November 30, 2007 2 comments:

I shot this the other morning as Maxim was eating breakfast...super funny, he's not fully awake, but he is really giving it his all singing the theme song for the TV show Little Einsteins.

The same morning he performed his version of the Transformer's theme song...I'll post that some other day.

See you in the funny papers....

I don't read the comic strips anymore...ever since the Farside and Calvin & Hobbes went to rerun there just aren't funny writers anymore.

Or maybe I just don't take time to read them anymore...Well, my dad just had surgery, so he is spending a couple days at home. He had to have work done on his nasal passage, this corrects an old boxing injury he sustained while prize fighting his way up and down the East Coast in the mid-60's.
Anyway...Dad was reading the paper today and thought Garfield was really funny today if you change some names and pretend Garfield is me!
Pretty true, and pretty funny...here it is.
If you can't read it here...click here to go to the Garfield website...

The party is over...

Thanksgiving at our house means 3 things...Family, Football and Hockey.

My brother-in-law brought my sister and their kids up from Kansas for the extended weekend and the party began on Thursday morning with the annual Turkey Bowl Football Extravaganza. I think I have played in 4 straight T-bowls, and they get colder each year.

Also received a huge hit from a fellow receiver while running a crossing route...his day was done.
(So Brad compiled great stats in a single quarter of action.)

After football, we headed to my office to sit in the hot tub for a nice warm-up, and to relax B-rad's neck after the vicious hit!

Thursday was spent watching TV and then headed to my cousin's house for tradition of Turkey and stuff.

Friday, the Rooster Cup Hockey Challenge started, and so did my ice time. I officiated 8 games of the tournament in 3 days. My legs were ready for a break today, so I only ran 2.5 miles.
Friday night we went to Brookings and watched SDSU knock off UNI in men's hoops.

Saturday more hockey and football watching on TV. Then to the James Valley auction at night.

Sunday, more hockey reffing..then had Uncle Skipper and some other people over for Steph's famous chili and 2X baked potatoes. Watched a little more football, as Denver choked and the Patriots squeaked by. Maxim, Steph and I played a little Monopoly...then slept...much needed sleep.

You have heard it before, but it is funny.

A young man named John received a parrot as a gift.

The parrot had a bad attitude and an even worse vocabulary. Every word out of the bird's mouth was rude, obnoxious, and laced with profanity. John tried and tried to change the bird's attitude by consistently saying only polite words, playing soft music and anything else he could think of to "clean up" the bird's vocabulary.

Finally, John was fed up, and he yelled at the parrot. The parrot yelled back. John shook the parrot and the parrot got angrier and even ruder. John, in desperation, threw up his hands, grabbed the bird, and put him in the freezer.

For a few minutes, the parrot squawked and kicked and screamed. Then suddenly there was total quiet. Not a peep was heard for over a minute. Fearing that he'd hurt the parrot, John quickly opened the door to the freezer.

The parrot calmly stepped out onto John's outstretched arms and said to John, "I believe I may have offended you with my rude language and actions. I'm sincerely remorseful for my inappropriate transgressions and I fully intend to do everything I can to correct my offensive and unforgivable behavior.” John was stunned at the change in the bird's attitude.

Just as he was about to ask the parrot what had made such a dramatic change in his behavior, the bird continued, "May I ask what the turkey did?"
Posted by Glanzer77 at Tuesday, November 20, 2007 No comments:

My uncle used to call me "Turkey Tom" when I was a kid because my birthday is on the 20th of November. This bothered me when I was 7, now I kind of like it.
It still sticks with me that my aunt always told me and my cousin that our hair smelled like the chicken coupe...now I can handle being Turkey Tom, but smelling like a chicken coupe??? The reason we smelled like the chicken coupe is most likely because for most of the day we were playing in the chicken coupe or worse.
Good farm memories with Uncle Jim.
Yep I turn 20+15 tomorrow. I'm not one of those that worries about age, I just want to stay healthy, active and able to roll with my boys when it's needed. So far so good.
I'm probably not going to blog for a few days, so I'll leave you with this bit of Turkey Tom humor. A month ago I posted Maxim's first "school picture". I made reference to a couple of my classic school photos, and my sister thought it would be great if I put them on the blog.

I guess my mom thought it would be a good idea as well, because she had them in an envelope at the house for me the other night.

So here they are.

...ROCKIN' the hemp necklace with beads...not quite sure what the hair was doing this year. 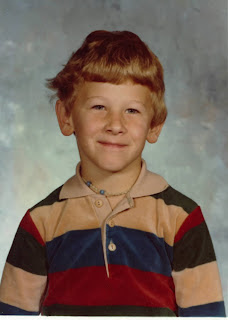 This is the 1st grade picture...as I look at it now, I kind of look tough. In that 1970's squinty eye, wavy, shag, parted down the side kind of way...OK I look half asleep, and I still do today! 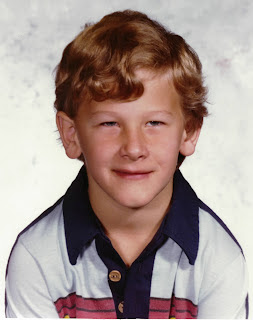 I play in a couple of fantasy football leagues with buddies from all over the nation. I have held the Champions Trophy a few times...but this year is a struggle.

Quarterbacks are killing me. I have a great running game and a great defense and defensive players...but the QB's haven't treated me with any respect.

I started with Drew Brees, he was horrible for like 4 weeks so I dumped him.

I had Jon Kitna for a back up, and he was producing so I started him for a few weeks.

After 2 weeks of starting him and only scoring 13 total points I dropped him for Farve..he put up 3 points in week 6...dumped him.

Started Jay Cutler...I'm a bit of a Broncos fan so this was a good marriage...he put up 13 points in week 8...respectable for a first outing.

This week I faced my brother-in-law (B-Rad) in a match-up I always must win to save face at the Thanksgiving Table.

Ironically B-rad started my old QB, whom he picked up, Jon Kitna.

Kitna put up 22 and Cutler went out with an injury in the 2nd quarter...giving me ZERO points. I lost by more than 50 points, Thanksgiving is going to suck.

I am pretty sure that if I were a real NFL coach this year, players would refuse to join my team or play for me, they either end up hurt or with horrible stats.

I do think that Fantasy Football makes you a demented fan of the NFL, as I have Adrian Peterson on my team, and I always want him to have 300 yards and 4 touchdowns, but every week I want the Vikings to lose by 30, so Chad Greenway and Antoine Winfield will have a bunch of opportunities to make tackles and interceptions.

Next week I'm starting QB Matt Hasselbeck from the Seahawks...that's how desperate I have become.
Posted by Glanzer77 at Monday, November 05, 2007 No comments: