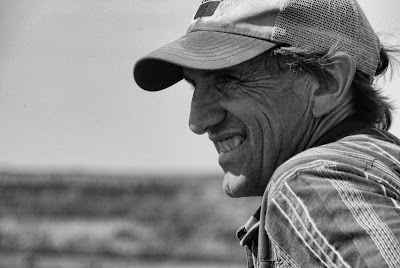 I'm a little late on this post, but I have been driving a car for the last 4 days...the 13th was Brecken's birthday.  The little wild man is 4 years old now.

Many of you know he loves skateboarding, wakeboarding, playing hockey and being a cowboy...quite the combination of loves we know, and it makes for some interesting playtime.


I am not sure but I think every dad has been a "bull"  for their children to ride.  My dad did it for me and I do it for my boys as well, and lately Kolby wants in on the rodeos too.  Brecken and Grandpa share quite a bit of time on horseback, and with all the growing B-Wreck has been doing lately he didn't fit into many of his clothes, so for his birthday he got clothes, and he was pumped about it.  New cowboy jeans, a bullriding vest and brand new boots just like the High School kids are wearing.  He is pretty proud of his new duds and can't wait to go ride Juneau with his new boots on. 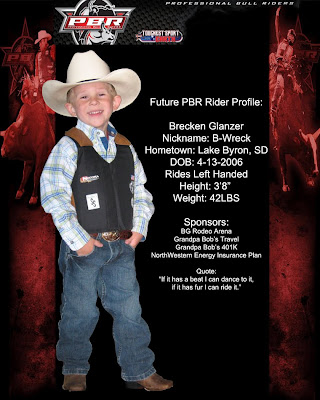 Here is the little picture I did to make him look like he was a real bullrider on the PBR tour.
Posted by Glanzer77 at Thursday, April 15, 2010 No comments:

Maxim's Spring Speech Festival was on Friday and if you remember from last year, he was kind of the hit of the show as he did his speech and then took a bow.

In the back of my head I wondered if he would do that again this year....

My dad took off for a meeting in Pierre yesterday and I asked him if he was staying at the Ramkota, he wasn't sure...so I said, "you know the one with the monster fish from the Amazon".  That jogged his memory and he said that was the spot.

He got into Pierre late last night and then texted me this AM that Noah the monster Pacu fish was dead.


I was stunned.  With all my travels to Pierre over the years that fish had become a friend of mine, ok an acquaintance...OK, OK I looked at him at least once every trip, but he was the mascot of the Ram.
Here is the story from KSFY...
A 41-year-old fish that entertained visitors to a Pierre hotel for nearly a quarter century has died.

Ramkota General Manager Rick Murray says Noah died Wednesday. The Pacu fish was born in 1969 in South America and was brought to the hotel in 1987, a few months after it opened.
During his time, Noah outgrew four fish tanks.
Murray says the hotel might have Noah stuffed and mounted. 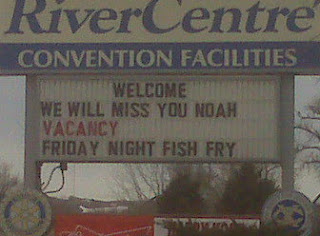 I think mounting Noah is a great idea, but you have to make sure he can sing "Wild Thing" or something like that.
Hotels don't do things like that anymore, now they brag about their cool 153' water slides,some are known for gigantic waffles at their continental breakfast and some are know for their awesome shower heads.  I prefer super old fish that seem too big for their tank.
My friend Pam told me of the funny thing that happened when the hotel announced that Noah was dead on their outdoor sign...it read...We will miss you...then below that their Lenten special notice of "Fish Fry on Friday!"  Epic.
Posted by Glanzer77 at Thursday, April 08, 2010 No comments:

Skype is a wonderful tool for keeping up with relatives, conference calls with co-workers, or just getting to see your kids via a visual phone call when you are traveling.

Steph and I have actually Skyped with our kids while driving in a car...crazy to think you can video call your children in a moving object.
Well, it was bound to happen...Brecken (3 years old) figured out what buttons to click on to dial up daddy on Skype, and while a neighbor was visiting with Steph, Brecken decided to call me at work on Skype about 10 times.
So I was entertained for about the first 3 minutes, then I felt like I was babysitting him from a distance. Pretty funny actually...here is the photo of Brecken telling me about his baseball jersey, and how he wants all the baseball jerseys in the world, and football shoes with nails on them.
Posted by Glanzer77 at Wednesday, April 07, 2010 No comments: