This is the time of year when the Lifelight Music Festival gets a lot of publicity, from the first time I met him to the last picture I saw of him, I have always thought that Alan Greene was really rock star Rod Stewart in hiding...so tell me...is it just me or do they look alike? 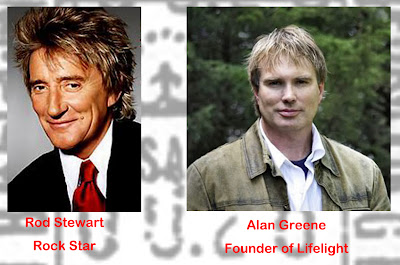 Alan if you end up finding this on some google/yahoo news feed, don't take this as a slam.  Rod is the original metro-sexual male...and to quote him "you wear it well".
Posted by Glanzer77 at Tuesday, August 30, 2011 No comments: 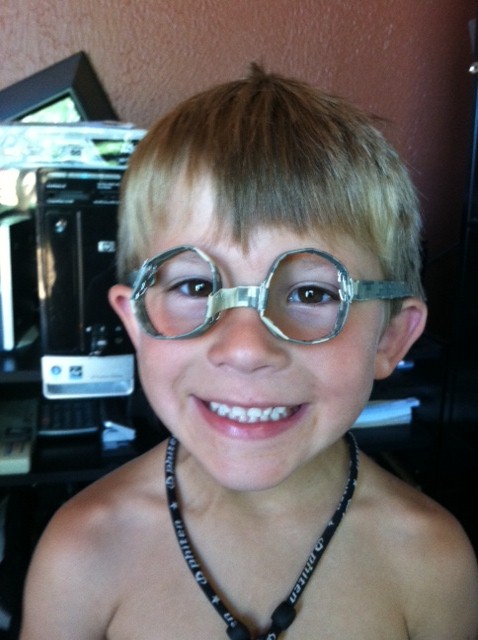 Brecken is all about duct tape lately...he makes bracelets, wallets, purses, necklaces and the other day...DUCT TAPE GLASSES.

It is a good thing this creative and over active mind is in school this year.

The only thing he didn't like so far about school...he has to wear shoes and a shirt all the time.﻿
Posted by Glanzer77 at Monday, August 29, 2011 No comments:

I have posted the first 3 of these to my blog in the past...Gymkhana 4 is the same megamercial for DC Shoes, Ford cars, Monster Energy Drink and they shot it at Universal Studios this time.
Love Ken Block's driving skills, and his businessman mentality.

My Son Is Goofy-footed.

With Maxim's selfish use of the boat lately everyone else's riding time has been cut, but I knew this was coming some day.  It is what happens when you play the same sport as your children at the same time...you start to sacrifice, don't get me wrong, I couldn't be happier than when I get to see my kids ripping behind the boat.

So with kids, the oldest one does something and the younger follows...right away, setting the standard for the youngest to do it too.  No, Kolby didn't wakeboard at 2 years old, she is still just a skimskier, but Brecken has been wakeboarding lately....but only about 20 or 30 feet before he would start to be pulled over the front of the board.

I was getting super frustrated that he couldn't lean back and ride once he was up.  So last night we went over to a section of beach that is pretty open and I wanted to pull him on the wakeboard by running beside on the shore, hoping that he would figure out just how hard he needed to pull to stay behind the board instead of falling out the front all the time.

So my trusting 5 year old laid back in about 2 foot of water and I readied myself to be "the boat"...he said hit it and I took off running......you know that moment in life where you had "the enlightenment"....like the way you were trying to do something HAD to be the right way, but then you did it the exact opposite and it worked perfectly?  Yeah, I had that moment last night as a frustrated coach, dad and wakeboard bro.

Everyone, even if you don't know what a wakeboard is, has a surf stance...you are either regular or goofy footed.  The easiest way to tell what you are is to pretend you are on a skateboard and then figure out what foot you would push off the ground with. The foot you push with is your back foot in the wakeboard.

I am a regular footed rider (left foot forward) when I skateboard and wakeboard, but when I snowboard I ride goofy or right foot forward.  I have no idea why I differ between the 2, I am a bit ambidextrous with my feet... I punt left footed, but can kick field goals pretty equally with either foot...I am sure it is my soccer background.

So back to Brecken, I had been teaching him for the last 2 weeks, with much frustration, to drop his right leg back and ride out of the water on his starts with his left foot forward.  Much to my surprise last night when he popped up out of the water on his own, without dad coaching him...he came up GOOFY and was solid as a rock.  So he went behind the boat and got a couple of short pulls in before he got too cold.

I guess sometimes we have to cast our nets on the other side of the boat in order for things to work out.

So for the record my sons are both left handed hockey players and goofy-footed wakeboarders...I'm the odd man out now...but there is still hope for Kolby!
Posted by Glanzer77 at Wednesday, August 24, 2011 No comments: 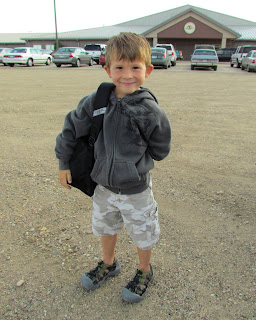 Brecken's first day of school was today so I have to post some photos to our blog to keep Grandma Reece up on what's happening.  He was excited to put that backpack on and wanted to wear it in the car...he settled for putting it in Kolby's car seat, "Because she isn't old like me for going to school." 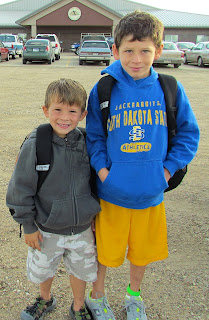 Maxim was being a great older brother this morning, he had a day of school under his belt this morning, so he made sure to let Brecken know that this was his 2nd day of school.  They went running off to the playground side by side.  Pretty sure Brecken will think he is in the 3rd grade too. 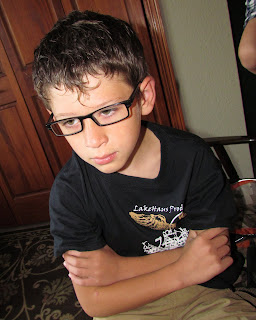 This is Maxim's photo right before we left for school yesterday.  I made him put his glasses on.  He was really happy about getting to wear them again.  As soon as the picture was taken, the glasses were back in their case and in his backpack.  I don't know if he put them back on or not!
Posted by Glanzer77 at Friday, August 19, 2011 No comments:

Grandpa Bob is doing a lot better, he NOW only gasps for air while he is coughing, laughing, getting up from sitting or sitting down from standing and I think mentally he is with it.  But then again I question the last part of that, because he and Grandma offered to take Maxim and Brecken over night tonight.

One "last hurrah" of summer before school starts...let's hope Brecken doesn't give Grandpa a flying cross body slam off the couch and the "last hurrah" will turn into another trip to the ER.

Also I need to extend our disappointment/excitement to Brad and Sally this weekend...Brad's first day in the pulpit as a head pastor is Sunday, and we were supposed to go down for a big family party at the Burkholder's, but since Grandpa wouldn't do well on the bumpy roads of Kansas, we are staying home.  The boys are bummed they don't get to go to Carson's house, but we know we need to keep Bob home.

My dad is a cowboy, well, actually he is a banker who has horses, guns, a chuckwagon, 14 saddles, a bull whip, 20 some pairs of spurs, 3 or 4 pairs of chaps, a few cowboy hats and a tack room full of stuff to do cowboy stuff on.

He is a fan of throwback era. Not the Johnny Unitas, Babe Ruth, or Bobby Orr throwback era...I'm talking further back than that. Like Wyatt Earp, Jesse James and more currently Roy Rogers type throw backs...the cowboy type.

He rodeoed for a while, and had roping calves at the arena, but I guess when cowboys get old and slow down they like to do things more simple, like they did in the 1800, back when life was "easy". They haul around a chuckwagon, sleep on the ground and cook in the heat of the day over an open fire on cooking utensils that weight 40 to 50 pounds. Easy?

Lately he has just been riding his horses, taking Brecken to Old West historical celebrations and competing all the time in Cowboy Fast Draw Competitions.

Sunday was like most other days, church, eat, then some time at the horses, but the one little difference was that he put spurs on to ride a horse that he usually doesn't wear spurs while riding.

As he was getting up on the horse, one of the 2 of them lost their balance (I'm not saying who I blame) but dad had to squeeze with his knee that wasn't yet in a stirrup and ended up spurring the horse high in the back. The horse bucked about 4 good pops and that is about all dad remembered.

He came to, and had the sense enough to call mom, who called Aunt Gloria and Uncle Lynn for help. She got out to the arena and found dad in a heap and short of breath. The ambulance came out and took him to the hospital where he found out what a concussion, 2 broken ribs a broken scapula and an overall beat down feels like.

He got out on Tuesday AM, and rambled into his favorite napping chair, and that's where I left him today. Pretty sore, sometimes short of breath and still trying to figure out if he could have had the horse settled down in a couple more bucks.
65 years old and he is still playing rodeo and wondering how that bronc put him on the ground...Get well soon, dad. Brecken needs his "friend" back.
Posted by Glanzer77 at Tuesday, August 09, 2011 No comments: