Ken Block and a Subaru.

Rally car driver Ken Block just announced that he is leaving Subaru for the Ford team, but this video of him driving a Subs will always be one of my favorite.

One of my favorite bands of the past 8 or so years is a group called Falling Up out of Oregon. I met the guys a couple times thanks to my boy Dave. The sad news is the band is breaking up later this month, but I found a quote by Jessy the lead singer that I thought was so true, but I didn't realize it until I read it.

This is Jessy explaining the basic format of every song on most Christian Radio:

"The Christian radio structure is as follows: Heavy hitting intro, toned down into the first verse, short pre chorus, chorus. Then verse two, no second pre chorus ( that’s supposed to be tricky ), more intense second chorus. Then this is always my favorite- The bridge that’s “supposed to take you to a different place for a brief moment.” ( which really is just a slight key change and, for most of the listeners, their least favorite part of the song ) and then a musical pause with just the singer beginning the last chorus and into…the pay off chorus at the end, usually played twice, in which the climax then concludes with a ring out of feedback or a small drum loop." Jessy Ribordy - Falling Up

If you are not into music, this doesn't mean much to you, but if you do listen you are having an "Ahhh-haa moment". The reason he said this is because they were criticized for not having a radio friendly single on their last album...he also said, "I really don't want my creativity to be put in a box that makes executives happy." I wish I could say that sometimes...
Posted by Glanzer77 at Monday, January 25, 2010 No comments:

Not much, just a great Jon Stewart quote...

I read this the other day...thought it was funny, since over the weekend a way under-powered North Dakota Jr. Gold hockey team played in a game I reffed, and I am pretty sure every mom of the players from North Dakota thought we lost the game for them, even though they got out shot 55 to 18, and lost 6 to 2.

Anyway I thought the quote fit.

"Korea, like Dakota, has two parts. A relatively friendly South... and a North that hates the world." - Jon Stewart, The Daily Show
Posted by Glanzer77 at Wednesday, January 13, 2010 No comments:

The link above is Mark McGwire's admission of using roids...yeah, this is a thing that will be held against him forever, but I respect him way more than all the other guys who are still denying it.
Posted by Glanzer77 at Monday, January 11, 2010 No comments:

Kolby has been taking her first steps lately. She gets really excited about standing on her own and usually falls over, or stumbles to where ever she is trying to go to.

She has only knocked her head on the wood floor a few times, and Brecken finds humor in that. She has also showed some signs of being a little bit sassy. We tell her know and she shakes her head "no" and waves her hand at Steph, as if to say, "don't tell me no".

All this walking is also increasing her already large appetite...she ate more ham, corn and stuffing than I did a few nights ago.
Posted by Glanzer77 at Thursday, January 07, 2010 No comments:

Maxim had a big hockey tournament over the weekend, and he now looks like a real hockey player as he lost the front tooth just above the tooth on the bottom that he lost a few weeks ago.
The huge hole is making his speech a little slurred and he is constantly sticking his tongue in the empty space and looking in the mirror.
I was proud of him trying to make an extra buck off the tooth fairy, as he grabbed his old tooth and the new one he lost and put them both out for the fairy to leave money for. 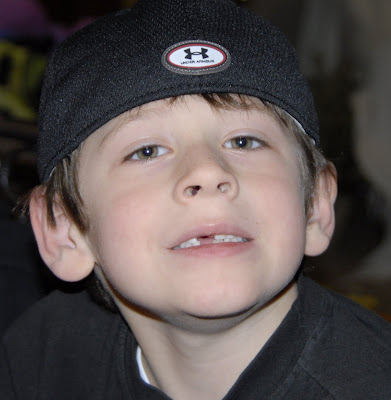