On Sunday after Brecken's wrestling tournament we got to the house with about 2 hours of daylight left, and Steph wanted to take a nap.  SO we took the party outside to snowmobile for a while.

The boys ran the sled around in front of the house and then we decided to take it to the lake.  We went down on the ice and hooked up one of our tubes that we pull behind the boat, and the crazy ice tubing session began.

We did this in the past, but the boys were pretty little...needless to say we almost went through another tank of snowmobile gas, but to see their red cheeks and snow all over their hats, it was worth it.

The boys liked when I whipped them around in circles and then they would fall off and go rolling across the snow.  I am pretty sure if you asked a parent if they would let their kid come over to the Glanzer Boy's house to play a game of "jump out of the car at 15 to 20 mph" they would say you are crazy...but put the kids on 12" of ice and another 5" of snow on top of that and you have a game of "stuntman" that any kid wants to play.

It is amazing how much fun you can have when grandmas and moms are not around!
Posted by Glanzer77 at Tuesday, February 26, 2013 No comments:

So in the whirlwind of weather we had in the last couple days I did not get the chance to blog about a special little girl's birthday that was on Monday...we actually started singing and celebrating her birthday early on Sunday, so it was like a 48 hour affair.

For her birthday she got what every little girl on the prairie wants... three huge snow piles and a day off from preschool to play outside ALL DAY! 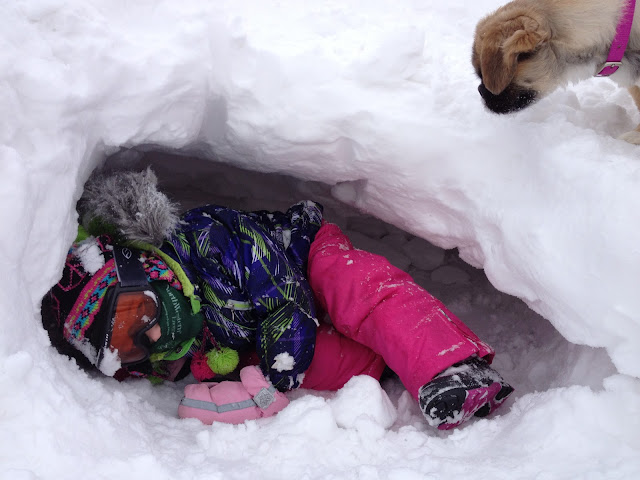 Kolby Capri is now 4, and she is in charge of the house.  Her brothers know she rules the roost and her dad is smitten by every little thing she does....kind of like the old Sting song.  "EVERY LITTLE THING SHE DOES IS MAGIC...".

Since she is our baby Steph and I often say, "could you imagine life without Kolby?".  Well, we can't and most people that meet her fall in love with her right away as well.  Her awesome personality is probably the reason she has a ton of nicknames.   So I thought I would list them and who is responsible for calling her by that name.

KoKo - Steph and I came up with that one right away
Kobilicious - Grandpa Roger's name for her
Kobo - Maxim calls her this
Capriski - another variation I made on her middle name
Peanut - Steph calls every child that is little this name.
Peanut Butter - Steph again just a more formal name of Peanut
Kid Capri - I use this one once in a while...it is also the name of a rapper from the '80s
KG - I like the Celtics so every once in a while I give her the Kevin Garnett
Capri - if I call her this in public nobody knows who I am talking to
Bug - Steph calls her this when she wants her to do something

Meatball - Her Uncle Brad started this one...and she loves it.
Beaner Buns - Another one of Stephs
KoKo Bean - Steph
Bean Dip - Steph (I am starting to wonder if Steph ever calls her Kolby???)


You might notice that Brecken doesn't have a nickname for Kolby...usually when he says her name it is really LOUD and if you would spell it out...it would look like this.

They play so well together...as gentle as a polar bear plays with a baby seal.