So like early on in our marriage I missed Steph's birthday, truthfully I was a day late...for some reason I got it in my head that the 31st was her birthday and it has never fully gone away.  I still have to think for a second and then I come up with the Jan. 30th date.

This morning was another one of those times I forgot to tell her happy birthday...I have been messing around with fevers over the last couple of days and this morning I woke up pretty out of it.  I basically just existed for the first hour I was awake.  Then about a mile out of town, it dawned on me...TODAY IS THE 30th!

We called Steph and sang her an off-key version of the song and her reply was, "wow, you really know how to make a girl feel special."  So we will be making up for it tonight.

Steph is such a blessing to me...my life would be a wreck, LakeHaus Productions wouldn't exist, and the kids would be sick of eating cheese tacos and frozen pizza.

So if you see Steph today or tomorrow go ahead and wish her happy birthday...we celebrate her birth on both days.
Posted by Glanzer77 at Wednesday, January 30, 2013 No comments:

To answer your first question...NO, I wouldn't let Kolby wrestle!  At least not until she turns 4.  She came up from playing in the basement and obviously had gone through the laundry for some reason and found Brecken's singlet.  She put it on and came upstairs to show her mom.

This girls makes life interesting.
Her Vital Stats
Wrestling Name:  Koko Capri
Hails From:  Parts Unknown
Weight: 28.4lbs...after second breakfast
Height:  Not big enough to ride the big kid rides at the fair, and STILL MAD ABOUT IT
Age: 3 years
Wrestling Style: Anything to get the job done on the 2 brothers tag team (Has been known to throw good punches)
Finishing Move:  Wet Willie to the ear, and then uses her beautiful eyes that hypnotize opponents and then they do what she wants.
Motto in life:  If mom and dad don't work out for me, I am moving in with my Grandmas. 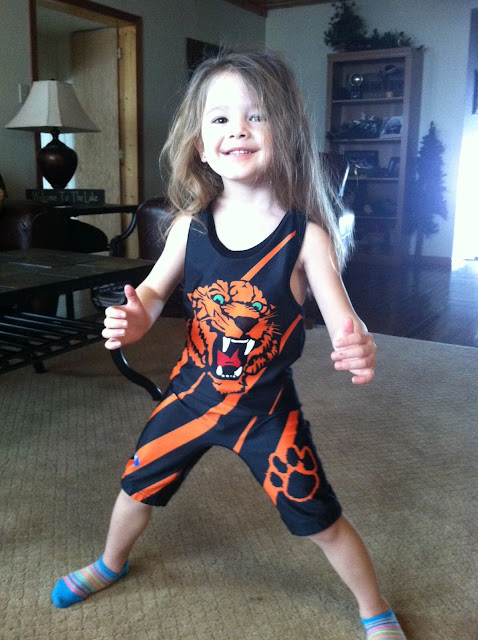 Do You Run Or Walk?

Today, they got out of the car and got in line...but it was their response to the fact that their classmates were already in line that made me laugh.

Maxim jumped out of the car, single strapped his backpack and in a panic said, "Brecken, come on we have to go now....we are going to be late!"  He slammed the door and sprinted to his line.

Brecken, on the other hand, slid out of his seat, flung his backpack on double strap and closed the door...then sauntered in the general direction of the school and the line of students that awaited him.  They both got to school on time and didn't hold up anyone's progress.

It was interesting watching Stephanie's personality and my personality come through in our children while they were in a "demanding" situation.  I'll let you guess which of our kids takes after which of their parents in this case, but I called Steph right away and we got a good laugh.

I will give Brecken a free pass on why he might have been a little more laid back today than usual....he played 3 hockey games and had 5 wrestling matches yesterday.  I probably wouldn't be too excited about running to a line the morning after a day like that either.
Posted by Glanzer77 at Monday, January 14, 2013 No comments: