MLPS...MOA...WOA...REI...800-Hockey store...I'm sure I'll make Steph and the kids hit my favorite music/drum store and a photography store too.
If you knew where we are going by the first 4 acronyms you probably lived in Minneapolis at some point...or you go there way too often. 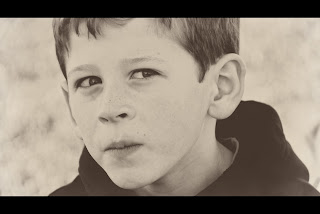 Truth be told we are going to make good on a promise to Maxim.  He has worked his tail off to keep his reading skills where they should be.  All summer he would put down what he was doing to work on his reading.
We promised him a trip to LegoLand at the Mall of America if he stayed diligent.  He did.  We are following up on our end of the deal.  He hasn't been there since he was 1 week old!  He has seen pictures.
The worst thing is...I got on the MOA website and it shows that LegoLand is under a renovation.  He was heartbroke.  There is a store open, but it's not the same.  We will have to go after Christmas sometime too.
Maxim is a very hard working kid and this will be a weekend all about FUN...MAXIM-STYLE.  Legos, Star Wars and the Waterpark of America.  His favorite things.
Posted by Glanzer77 at Thursday, October 28, 2010 No comments:

After a busy weekend of LakeHaus Productions work, Sunday afternoon was one to enjoy with the boys...well, the boy, as Brecken took a long overdue nap.  Since playing football with at least teams of 2 vs. 2 is way more fun than 1 vs. 1 Maxim and I decided to forgo our usual football game with Steph and Brecken on Sunday afternoon for a little pheasant hunt. 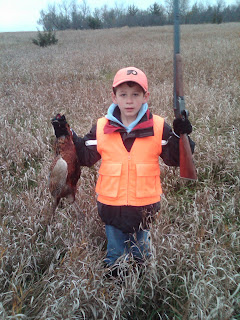 My pheasant hunting has been lacking this year, due to a busy LHP schedule and an injured English Pointer.  Lilly was working like a rockstar on my first pheasant hunt of the year, and 45 minutes later I was headed to the vet to get her stitched up.
So on our hunt on Sunday, I decided to leave Lilly in the kennel and take my 16 year old blind and deaf German Shorthair Pointer (kind of like if Brett Farve were a pointing dog) across the road to hunt the public ground on the NE corner of the lake.  I have not seen as many people hunting it and we heard birds so I knew we should get at least one out of the walk.
We got geared up and headed across the road to go "look for bad guys".  Maxim took along his fake side by side shotgun that Grandpa Roger bought him and it was a good tool for me to teach him firearm safety.  So we started hunting.  Basically we just followed Annie's lead.  Then it happened, she locked down on a bird and pointed rock solid.  The nose still works.  A hen got nervous and flushed out, then the rooster came out...it flew to our right and Maxim said, "aren't you gonna shoot it dad?"  One shot, one dead bird.
He carried it the rest of the day in his hunting vest...and proceeded talked about Star Wars The Clone Wars the rest of the 2 hours we were out.  So we pretended we were Clone Troopers on planet Dakota looking for bad guys.
Last funny part of the night...about a half mile from home another dog joined us.  Lilly broke through the kennel fence and must have heard me using the whistle to control Annie and found us.  She didn't look too hurt.
So we had a bird to clean and a kennel fence to fix when we got home.
Posted by Glanzer77 at Monday, October 25, 2010 No comments: 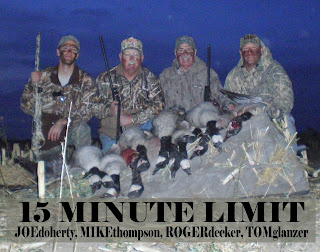 A couple of photos from our fun goose hunt. I know pheasant hunting in South Dakota is king right now, but the geese are a blast. (pun intended)

We thought we were not going to see a goose and then about 20 minutes before we had to stop shooting, the first group came in, then the 2nd group...and by the time we were limited it was only about 15 minutes after we had started shooting on the first group. 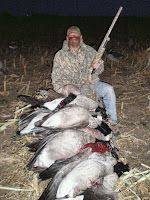 My father-in-law and his buddy from Ohio are the guys in the middle and Joe on the left is my buddy from work, I have to call him "Guide Joe" now.
Mike and Roger might be the only 2 out of state hunters to leave South Dakota and brag about the waterfowl hunting as opposed to the pheasant hunting.
Posted by Glanzer77 at Thursday, October 21, 2010 No comments:

As a person who has produced videos for a living, this one is pretty amazing.
Remember it is one shot through the entire thing.
Posted by Glanzer77 at Friday, October 15, 2010 No comments:

There was a day when my cousins and I spent a lot of money buying "ninja-type" throwing stars out of martial arts magazines, and making nunchucks out of broken hockey sticks and old dog chains. 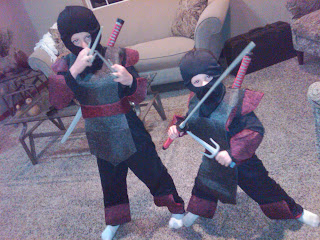 We would train to be ninjas, pretending to be able to jump amazing distances, and wield swords like the guys we saw in the movies.  Ninjas rocked back in 1980-something, and they still do today.
Steph bought the boys the 1984 version of Teenage Mutant Ninja Turtles, and now our boys love to play ninja-time.  With Halloween costumes in the aisles of stores our kids end up getting a couple for the year.  Heck, we really don't even go trick-or-treating, they buy the suits to play dress up all year long.
This year they both got ninja suits, and it was a big "secret".  On Monday night, we got home from hockey and Maxim and Brecken wanted to quickly get in the house, I knew why.  So I wasted some time in the garage and then went inside the NINJA'S LAIR.

The boys had Steph tied up in Kolby's room, and when I got in and turned on the lights they proceeded to beat me with plastic swords.  Brecken needs to learn to let up a bit when he is going to make contact with me.  He smacked me in the arm and IT HURT.  So I went down and they proceeded to jump on me and punch me until I said I was sorry and gave up.

So if you come to our house and the lights are off, enter with the knowledge that you are going to take a plastic sword to the arm.  AND YES...NINJA'S WEAR WHITE SOCKS.
Posted by Glanzer77 at Thursday, October 14, 2010 No comments:

My sister had a birthday yesterday, I called her at 7:05 a.m. and sang happy birthday on her voicemail, then reminisced about dumb games her and I used to play in the back of the car when on road trips with our folks.  (Yeah, this was one of those annoying voice mails that goes on and on) 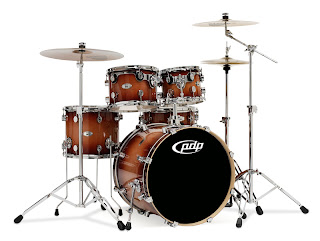 There are things about your childhood you just don't forget, like the backseat games, fighting with Sally every Sunday after church and playing my drums at the time when it would be most annoying to her..etc.
Growing up my drum set was in the basement in the family room, where we did most of our TV watching.  Steph has never had the experience of a drum set in the house until last week, she let me purchase my first set of acoustics since my old set was basically worn out and sold years before we were married.

I set up the new kit on Sunday, but haven't had a ton of time to tune it and play it so my level of annoyance has been minimal.  Each time I have played I always ask, "I wasn't too loud was I?"  Steph always says, "no, I liked it."  Maybe it isn't that loud in our house or maybe Steph is super deaf, but I keep having flashbacks of the "stick throwing incident of 1987" and I have been trying to not re-enact that event.
REWIND to 1987, I'm sure I was wearing a Nike shirt with my name on the back, had long hair and "Bermuda" shorts...the home speakers were blasting Bon Jovi, Quiet Riot, Stryper, AC/DC, Def Leppard, Whitesnake or something like that, and I was playing along on my drum set...LOUD AND PROUD.  (To this day I can't believe Penny never told me to be quiet)
Sally would have been wearing something teal and purple with leg warmers and big hair, and she was sitting on the couch.  The unwritten rule was first one in the room gets honors to the remote (I actually broke a toe one time racing her to the remote), or if I'm playing first she would have to live with it.  But this day in 1987 I decided to break the rules, and play the drums while she was watching re-runs of Little House.  There must have been drum sticks laying all over the floor, and she grabbed one and said, "if you don't quit playing I'll chuck this at you!"  I kept playing, and she Nolan Ryan'd that thing straight at my melon.

I don't recall if it hit me, glanced off me or hit the drums first then hit me, but I called her bluff and she threw down the royal flush, and it hit me in the head.  I had just been told by a science teacher that if you get hit in the temple you could die instantly, and armed with that knowledge I proceeded to cry out this phrase that has lived on, "YOU, sniff, COULD, sniff, HAVE, sniff, HIT, sniff, ME, sniff, IN THE TEMPLE!"

Well, it didn't hit me in the temple, and I stopped playing long enough for her to see Laura win the spelling test and save Walnut Grove from a blizzard.  I have to think at some point Steph will walk into the room and chuck something at me in order for me to stop playing...just to make Sally happy.

To be honest I think it was that traumatic day that kept me from making big as a drum rock star.
Posted by Glanzer77 at Wednesday, October 06, 2010 No comments:

So it looks like the T-pups ticked off the Hottest Team In Minneapolis by selling themselves....I mean part of their building to a familiar hospital brand around here.  It seems the Twins are mad at their neighbors for selling some advertising space on the side of their building that will dominate the sight line in right field.
Not real sure why Sanford would advertise in MLPS, maybe I don't understand their new business model, but I do know that almost every TV in eastern N.D & S.D. will be tuned in to watch the games if the Twins do well in the October Classic...so technically they would be speaking to their market.
On a side note, (tongue-in-cheek here) the other Sioux Falls mecca/hospital Avera has purchased some signage as well...they picked up a billboard at Bloomington Jefferson High School's JV Football Complex...just to, once again, try to keep up with Sioux Valley/Sanford/T. Denny.

Keep reading...click on the link below if your name is T. Denny Sanford.
If you are wondering about the title of my post...click here...
Posted by Glanzer77 at Friday, October 01, 2010 No comments: